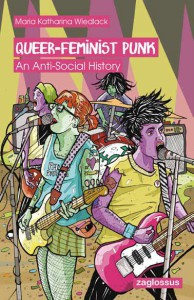 This monography highlights queer-feminist punk productions, protagonists and scenes within punk rock and provides a historic overview from the 1980s until today. The book shows how queer-feminist punk is capable of negotiating and communicating queer-feminist theoretical positions in a non-academic setting, thereby producing alternative forms of political movement and of queer theory.
By combining feminist and decolonial accounts with their specific punk philosophy of anti-social queerness and expressions of negativity and anger, these countercultural forms of politics and theory parallel recent developments in the academic field that have become known as anti-social or anti-relational queer theory. In contrast to academic theory, which argues that queerness as a negative force is unable to support social relations and can never be used for political actions, queer-feminist punk politics have – as this book shows – the potential to form new and exciting social bonds that exceed normative forms of relationality.
The effects queer-feminist punk movements have beyond the limits of their countercultural spheres are highlighted by an analysis of how queer-feminist punk activists engage in the context of contemporary Occupy movements as well as by a discussion of the latest Free Pussy Riot solidarity actions.